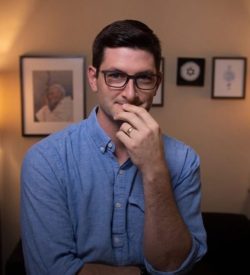 Dan Johnson ’07 knows about stories. The creative director of 4PM   Media, an innovative videography ministry dedicated to bringing beauty and truth into the world through authentic storytelling, he is the mind behind popular Catholic documentaries such as Speaking to Sparrows, as well as The Wild Goose Ministry’s visually stunning miniseries on the Holy Spirit.

And, he is at the forefront of an evangelization revolution driven by young Catholic creatives who are  leading with beauty, capturing humanity’s longing for God in authentic stories of people and places.

Johnson’s own story began in Steubenville, although not at Franciscan. A talented high school basketball player with aspirations to play collegiately, he did not even consider Franciscan until a knee injury derailed his basketball plans.

The injury proved providential: Receiving one of Franciscan’s Commuter Grants, which drastically reduces the cost of tuition for local students, he would go on to connect deeper with his faith and meet his wife, Lauren (McAleer ‘07). He also gained insight into developing his story-driven ministry, which he would employ first as the director of the Family Life and Respect Life Office for the Archdiocese of Mobile and later as a founding member of 4PM Media.

“We have such good stories in the Church,” says Johnson, who was a theology major at Franciscan. “You look at the life of Christ, the lives of the saints—anything I learned here in my theology classes, or later gave a talk about in ministry—it’s all telling a story. And those are stories people want and need to hear.”

Most recently, Johnson and 4PM have partnered with Franciscan University president Father Dave Pivonka, TOR, to produce Sign of Contradiction, a breathtaking documentary about the life of St. Francis of Assisi, and a new series on conversion titled Metanoia. In doing so, he has reconnected with his alma mater,  drawing closer to a dynamically orthodox Catholic community like no other in the country.

“It’s a really exciting time to be a part of the Franciscan community,” says Johnson, who is a father of six. “There’s a freshness and newness around campus, and it’s the right time to be engaged and excited about the University.

“It doesn’t matter who you are,” he continues. “To be here, to be on campus, the Spirit is always present. There’s something about this place that is just special and holy. When you’re supporting Franciscan,  you’re supporting that.”