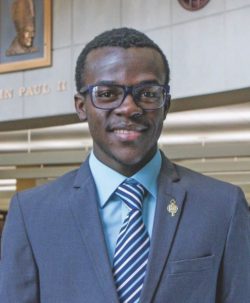 A few years ago, Gary Pierre was living in a mud shack in Haiti without running water or electricity and eating no more than two meals a day. Today, he is a sophomore at Franciscan University majoring in international business and playing on the school’s tennis team.

Despite having lost both his parents and growing up in an impoverished country, Pierre has been able to set out on a path that he hopes will lead back to Haiti and helping the people there.

The 20-year-old’s life began to change when, at 14, he was recommended to HERO (Housing, Education, and Rehabilitation of Orphans), a group begun after the 2010 earthquake that devastated the island nation. Since its founding five years ago, HERO has helped provide academic and athletic opportunities for more than 500 Haitian children.

With the group’s help, Pierre learned English, graduated from a Georgia high school through its online program, and, with no previous exposure to either, mastered both chess and tennis well enough to play competitively. He was led to Franciscan in part through a connection to the Baron tennis team that was forged when he met the coach and players on their spring trip to Florida.

Among the benefits he has received from Franciscan is a reawakening of the Catholic faith into which he was baptized. He participated in the Rite of Christian Initiation of Adults (RCIA) program and was confirmed at Easter. He also is in formation for the Disciples of the Word Household.

In addition to his classes, Pierre works on campus as an athletic administrative finance and budget assistant, enabling him to send some money back home to help his siblings, the youngest of whom is a junior in high school.

His challenges as an international student have included homesickness—especially in the winter—and adjusting to the food, the people, and the spirituality on campus. Even so, he says, he has been treated well and has made many friends.

Besides his tennis skills, Pierre believes he has been able to offer his fellow students his experience of living in a poor country.

“Just by telling them my stories, I hope they can learn to be thankful because sometimes people take things for granted.”