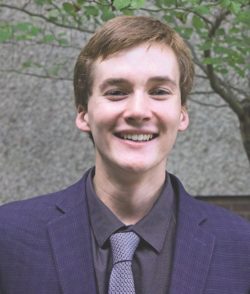 James Manzer prides himself on being practical and meticulous. Each week, he sketches out a  calendar in which he plans each hour of his day. In high school while researching potential colleges, he carefully balanced the program factors that would help him reach his goal of becoming an environmental scientist while also growing in his faith.

Yet when he visited Franciscan University of Steubenville on a suggestion from a youth group leader, intuition—and the Holy Spirit—took over.

“From the time I visited campus, I felt Franciscan was my go-to college. It just felt right,” says the junior from Bristow, Virginia. “For me to choose what college I was going to mostly on the basis that it felt right was unusual. Without doubt, the Holy Spirit called me to Franciscan.”

Aside from the community, research-intensive science program, and dynamic  campus faith life, Franciscan offered James a chance to explore the idea of personal vocation—a unique calling from God to live out personally and professionally. Through Franciscan’s Center for Leadership, James was able to detect his personal vocation: to become a biomedical engineer working to cure developmental disorders and disabilities.

“I wasn’t planning on going into engineering—it just wasn’t what I was going  to do. But at Franciscan, I realized how passionate and inspired I would be by helping people with disabilities through biomedical engineering.”

At Franciscan, James came to realize his high school experiences volunteering  with special needs youth—including his friend Donald, who has cerebral palsy  and no use of his extremities—were not isolated experiences. In fact, they  were God’s way of nudging him toward biomedical research, which he’s  had plenty of opportunities to conduct through Franciscan’s mentor-based, research-intensive Engineering Program.

Through his first two years in the program, James has taken full advantage of  Franciscan’s integrated approach to personal and intellectual growth: attending  daily Mass, participating in the Center for Leadership, and working with his professors on research projects. None of it, he says, would have been possible without some help from God—and Franciscan’s generous benefactors.

“The financial aid through a merit scholarship was a major component in me  being able to attend Franciscan,” he says. “It made Franciscan an option when it wouldn’t have been without the financial help.”