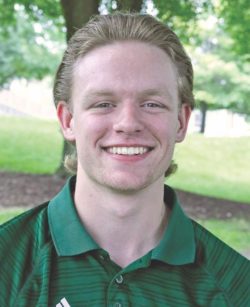 When he was in high school, Jerome Harkins joined his youth group on a trip to the National Shrine of Divine Mercy in Stockbridge, Massachusetts. There, his youth group leader posed a simple question: Do you want to save your career, or your soul?

From that day forward, Jerome knew that if he wanted to pursue an academically rigorous education in math and computer science, and eventually become an engineer, he would need to do so in a place that would “push me to be a better Catholic each and every single day.”

Jerome found that place soon after, when the Franciscan CFR friars in Newburgh, New York, in addition to  his parish priest, Father Jeffrey Pomeisl ’09, encouraged him to look into  Franciscan University of Steubenville. A baseball player and musician,  Jerome wasn’t just excited to grow academically at Franciscan, but also to  unite his artistic and athletics gifts with his faith.

However, with nine children, his parents couldn’t afford to send him to  Franciscan. Knowing he’d have to pay for school himself, but also recognizing  he was called to attend Franciscan, Jerry prayed unceasingly for a scholarship. And, when he received one, he was determined to strive for excellence in  every aspect of his college life.

“I never played lacrosse before coming to Franciscan, and the transition from being a catcher in baseball to becoming a long stick midfielder in lacrosse was huge,” he explains. “In order to accomplish what I wanted to, I had to organize my day so I would have time to eat, pray, go to class, study, lift weights, and practice. Playing lacrosse really helped with self-management, and it was a very tangible way for me to see if I put my mind to something, I could accomplish it.”

Above all, playing lacrosse for an NCAA Division III team helped Jerry grow in virtue with his brothers.

“Learning to play not for myself but for the glorification of God has literally brought me to my knees with my teammates,” he says. “Win or lose, we pray  for the opposing team.”