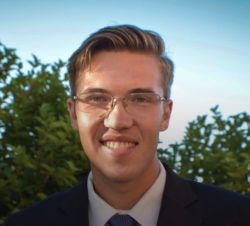 Nathan Ware admits he did not originally plan to go to Franciscan University. Educated in public school throughout middle and high school but strong in his faith thanks to the Steubenville Youth Conferences and his own apologetics study, he felt he had already mastered the basics of how to defend and live out his faith in the world.

All that changed when he discovered the rigorous intellectual life at Franciscan, including the Great Books and the Humanities and Catholic Culture programs.

“What really led me here was the Humanities and Catholic Culture Program, which is a phenomenal liberal arts education,” says Ware, who runs cross country and participates in Franciscan’s Center for Leadership program. “We’re not just getting information but rather taking the time to ask and examine the deep  questions that intellectuals have probed for the last 2,500 years.”

The program has been particularly beneficial, says Ware, because of the quality of faculty, including  Professor James Gaston.

“He takes us through the perennial truths and questions that Catholics have discovered and pondered,  so that we may be formed to think well about truth, reality, and God.”

Drawn to the intellectual life himself, Ware plans to pursue a master’s in philosophy and eventually a PhD— a plan that is within reach thanks to his excellent work ethic and the full-tuition Scanlan Scholarship he received as an incoming high school student.

“Right now, I think God is calling me to an intellectual vocation such as a professorship,” he says. “Not having to pay tuition as an undergraduate makes continuing with a master’s and a PhD much more feasible for me, which is a great blessing.”