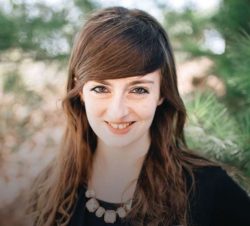 When it comes to covering issues of religious freedom, the pro- life movement, and the role of traditional Judeo-Christian values  in the public discourse, few journalists write about the topics with more  clarity, knowledge, and respect for Church teaching than The Daily Signal’s  Rachel del Guidice ’16.

Del Guidice visited dozens of schools as a teenager, accompanying her father on conferences and lectures for his job as an art professor. That’s how she knew Franciscan was special.

“There was such a sense of joy and community at Franciscan that I never witnessed anywhere else,” says  del Guidice. “Going to Franciscan became a goal I set for myself.”

She was able to achieve that goal largely through the help of Franciscan’s generous donors, receiving the St. Clare Scholarship for transfer students after spending a year at the University of Akron.

“Without that extra help, it would have been a lot harder to pay my way through school,” says del Guidice, for whom the scholarship proved to be the deciding factor in transferring to Franciscan. “It’s cliché, but it’s true: Scholarships really do help, no matter how much they are.”

An active member of numerous clubs as a Franciscan University student, she held leadership positions in Students for Life and wrote for The Troubadour student newspaper. Now, as a writer for the Heritage Foundation’s online periodical and a frequent guest and host of podcasts and web-exclusive video segments featuring senators, members of government, and D.C. power players, del Guidice frequently draws on lessons from her journalism classes.

Of particular note, a professor “told us there were times we were going to be tested and our feet would be held to the fire, but we needed to stay strong and not buckle on what we believe,” she says. “Realizing that has been so helpful in seeing my vocation as a calling from God, and one that will have a positive impact, even if I can’t always see it.”